I phoned Pete, and both he and Lorraine were feeling a bit under the weather. Mas and I planned to go to Borehamwood and get Salty some more of his food. Just as we were leaving home we met Myk who chatted with us for a while and bought us up to date with local current events.

Once in Borehamwood we went to the Golden Plaice and had a fish and chip lunch, and they gave us a cold fish for Salty, which he enjoyed later, and about four sausages! While we were having lunch the Borehamwood Carnival passed by, and I was sorry I had not got my camera.


We got another sack of kibbles for Salty , but the pet shop were doing a session of dog photos for their owners so we were pleased to leave quickly to escape the noise, and that was just the pet own 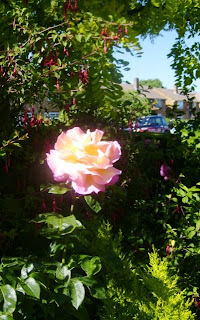 
The roses are very good this year. We have a rose mystery; we had a bush of white roses at the front of the garden, and a pink one at the side near the house. These roses seem to have changed places as where there was pink there are now white roses and where the whites used to be are now pink!
Posted by Margaret at 16:32