On Saturday we drove off to St. Albans and met Tania and Robert for lunch at the Bua Thai restaurant, where we saw the friendly owner who has just come back from a long visit home, and we caught up with all the news.

On Sunday we called round to Margaret and John's and had tea in their lovely garden. Eddie and Christiane were there too, as they had returned from France for a month. It was fun seeing everyone again, even if it was just for a short time.


Toby came back from Wales in the late afternoon, and we had a nice dinner with him in the evening, with lots to talk about.

Toby had been working on my computer, and un-networked it from Mason's one, and took it back to the state it had been in when it left the factory, and it seems to be working again.


On Monday, after a leisurely breakfast Toby and I went off to Euston on the tube. Euston seems a different place from when I used to work there years ago. We walked around town, past London University where Toby got his second degree 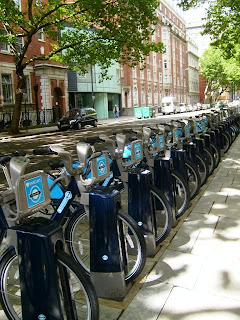 We noticed with approval that Barclays Bank had set up a bicycle for hire scheme, but the first half hour was free. Later we saw people using them, and they are quite distinctive. 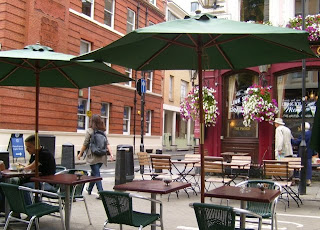 We had a coffee at this pub, and sat outside watching the world go by for a while, and most people seemed relaxed and friendly. 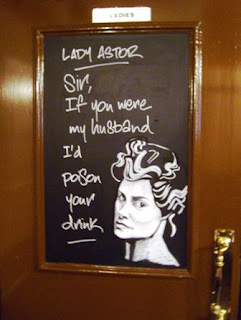 This chalk drawing was on the outside of the door to the ladies toilet, and inside several ladies were laughing, and saying they felt like that about their husbands too!

We passed the British Museum, and noticed that a temporary garden had been set up in the forecourt with plants from Africa, so we looked at them for a few minutes. 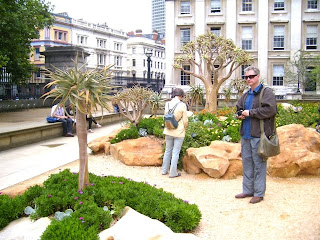 The small tree below is called a Silver Tree because on the underside of the leaves there is a thick covering of silvery white hairs. 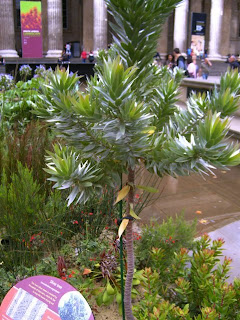 Later there were periods of heavy rain. I left Toby up town, and returned home as Mas and I were due to have shots from our surgery in preparation for the visit to Costa Rica.
In the evening we had dinner with Toby before he sped off to spend the evening with friends.
Posted by Margaret at 18:32 251 comments:

On Thursday Toby spent most of the day trying to fix our computers with little success, but much frustration. Later Toby went out for the evening, and at 7.00pm Barry and Linda came over for a meal, and we had a really nice evening chatting to them both.

Today Toby went off to Wales with a friend, so that they could visit Danny and his family.
Mas was busy with his work, and having maddening problems with his computer. As it was Mason's birthday I suggested that we have a lunch break and go off to the Three Horseshoes in Letchmore Heath, as I think it is his favourite Pub. We did this, but Mason was so mentally involved with his business project, that we sat and stared at the walls without any conversation or anything to talk about. After looking at the ducks on the pond for a few minutes we went home.

Later, on the spur of the moment we called Poppy and Ben and invited them for dinner, and had a really enjoyable evening after all!
Posted by Margaret at 18:11 27 comments:

On Monday we went to St. Albans to try to get Mas some comfortable trainers, and ended up buying two pairs. As the computers are not functioning, I spent time gardening, and sorting out the plants in the conservatory.

As we are expecting Toby to come for a visit tomorrow I prepared his bedroom and generally straightened out the house. We also went off to get some shopping, so that we do not have to do it when he is here.


Toby arrived early at Gatwick, but had to travel up to Mill Hill. I saw Barry next door, and Linda who is presently staying with him, and invited them for dinner later this week. When Toby arrived we spent most of the day talking, and had a very nice rib dinner which Mas cooked and we had a tasty bottle of wine with it too.

Today Toby and I went off to Hampstead, leaving Mas to work peacefully at home.
We took the Tube, and walking down from Hampstead station, found a cafe to have a quick coffee. Then walked through Hampstead looking at all the familiar places. We walked over Parliament Hill Fields with lots to talk about on the way, then wended our way back to the Flask Pub, and had a bite to eat there. 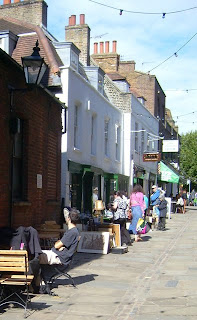 
Later we walked up Heath Street to the White Stone pond, which had an ecological area of reeds planted in it. We walked past what used to be the historic Jack Straw's Castle and went the back way to the Hill Garden and walked on the terraces there, before going to Golder's Hill Park looking at everyone enjoying the nice weather.

Eventually we walked down the sandy path and down to Child's Hill, where both I and Pete had been born. We walked to Golders Green and took the tube back to Edgware and then walking home! I was pleased that I could walk so far in one day still.

Mas had made another nice evening meal for us, and afterwards Toby left to spend the evening with friends, and Mas and I watched a TV programme about the Normans.
Posted by Margaret at 18:53 7 comments:

On Monday I walked off to Stanmore for exercise, then in the afternoon Mas and I went off to the forest in Edgwarbury Park and collected blackberries and plums from a tree while we were walking. Later Mas had an appointment with the doctor (not because of the fruit).

Mas began to feel a bit unwell in the evening, so we watched the Sixth Sense; I had not remembered it being such a good film.

Mas was feeling better this morning, and the computer man came to try to fix at least one computer. He was here trying his best most of the day, and then came back in the evening. He was paid £120.00, but in fact the computers are worse than before! Ben came and had a look at the computers too, but did not want to try anything too radical.

The rest of the week passed in a haze of computer anxiety interspersed with comfort gardening, at this rate I will soon be a serial gardener! I tried to get on with the paintings for Toby and Romy, but things were too tense. On Friday my computer gave up the ghost completely. Mas went to the doctor for a routine check up, and found his weight and blood pressure are the same as they were last year. I don't know how he does it, but I know if things continue like this, the men in white coats will soon be coming to take me away.

In the evening we settled down to watch Wallendar, escaping into the Swedish countryside, then Salty burst in through the curtains carrying a very alive rat. Pandemonium ensued, and by the time we had sorted it all out we had lost our storyline! Talk about last straws!
Posted by Margaret at 16:02 4 comments: 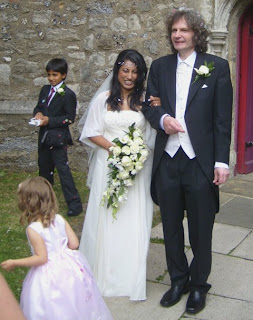 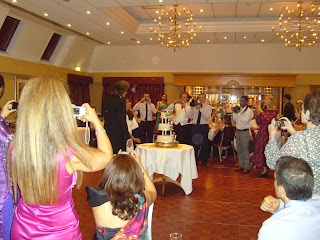 Mas and I left the celebrations before the dancing began; it was due to go on until midnight, but we were both feeling a rather tired by this time. When we arrived home our road was filled with parked cars due to another celebration nearby, so we parked some way off. Much later as we were going to bed, Ben and Poppy rang the front door bell; they did not see our car so they thought that we may have had a problem, and be stranded on a motorway somewhere! How nice to have friends who care!
Posted by Margaret at 20:29 1 comment:

On Saturday we drove up to St.Albans for Mas to drop off some papers for Robert although it was not our usual day to go shopping there. Once there Tania told us we were to stay for lunch, and she presented us all with a tasty meal of plaice, asparagus and sweet potatoes which was a nice surprise.

The computers were almost completely useless today; it is enough to drive you to drink!
In the evening we watched another episode of Wallander.

The next week passed with more computer frustrations, and Mas spent lots of time and energy trying to track down anyone who might be able to put things right. I kept myself busy gardening, walking and keeping in touch with friends and relatives by phone. I was trying to paint a picture, but did not feel relaxed enough to paint.

On Friday Mas went to the hospital to see a chiropodist as he had been having pain in his feet. After a thorough examination it seems that he has been wearing shoes and trainers that do not fit well, and that has caused sensitivity.

Later that day we went to Brent Cross shopping centre to see if we could find some well fitting trainers for Mas. We looked in all the sports shops there, but did not find anything that was good enough. We did talk to one really nice shoe salesman about computer problems and he made several good suggestions. Later Mas phoned a computer technician, but he could not come over for a few days!
Posted by Margaret at 19:53 No comments: