On Thursday I had to return to the hospital to talk with the specialist nurse as planned, and this was very useful and I came away feeling cheerful. The weather was warm, and people were sitting outside at the pavement cafes in Belsize Park.

Pete came over in the evening and we had a nice time sitting around and talking while listening to the good jazz compilations that Tobe made for me. Pete also bought lots of CDs to watch and we saw a couple of Frasiers before going off to bed.

The next day we had a relaxed breakfast, and a surprise package was delivered which came from Romy and Tobe and was filled with all manner of intriguing things including some birch knitting needles (as I had lost my other ones in hospital), Japanese wool and some hand dyed wool which it turns out is partly made from seaweed. Also a game called Carcasonne which is being played in Ontario and looks very intriguing.

We went to lunch at our pub in Stanmore, but were disappointed as the food was not good and the place seemed to be full of unpleasant people which was unusual, but I expect it will be a long time before we try it again.

Pete volunteered to do the vacuuming, and we all had a quick rest before having tea and I walked with Pete down to the station as he was off to meet a pal in Hampstead.

In the evening Mas and I watched some more I Claudius and some Frasiers as there was nothing of interest on TV.
Posted by Margaret at 16:40 No comments:

St. Albans lunch and I Claudius

Today we went to St. Albans to have lunch with Tania and Robert and get fruit and vegetables from the market. The drive was lovely as all the trees are in leaf now and everything looked fresh and green; it seems a long time since we last did this customary drive.

Despite the gloomy overcast weather the market was busy and we got most of the shopping before going to Buai Thai restaurant.

We had a lot to catch up on as we had not seen each other for a while, and both Robert and I had been in hospital and we had a lot to talk about. We had a lovely lunch and as usual the friendly owner came to talk with us, she almost wants us to eat there for nothing, and we have to insist on leaving a tip as she tries to give it back to us, and kisses us when we leave. 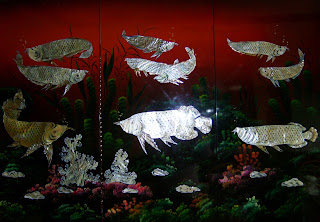 This is part of a wall panel in the restaurant, the inlaid fish are all mother of pearl.

This evening we are planning to start watching reruns of 'I Claudius' which was an excellent historical production, even though it is now so old. There is so little of any interest shown on TV lately.
Posted by Margaret at 19:48 No comments: 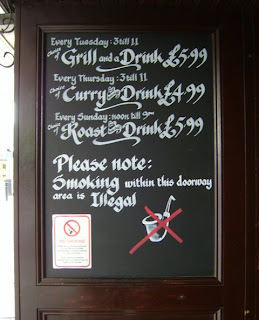 During the night there were two enormous claps of thunder which caused me to unplug the phone and computers, having had a hi-fi system killed by lightening last year.
Posted by Margaret at 19:19 No comments:

Last night we watched Blind Date which we have seen umpteen times, but it still makes us laugh; Blake Edwards films just have such good timing.
After breakfast Mas and I went for a shortish walk around the neighbourhhod as part of our getting healthy plan. As we came through the door the phone was ringing and it was Pete, who is planning to come to see us next week.
I managed to plant the hanging baskets and stuff more pansies into the window boxes. It felt really nice to be doing gardening again. There was no sign of the field mouse, but Mas thinks it has moved into the shed as someone had been eating the birds' fat balls.
A few days ago a big dusty looking fox came into the garden and was sniffing around under the bird feeder when he spotted a cat passing through the garden and gave chase. The cat however was much faster and got clear away. 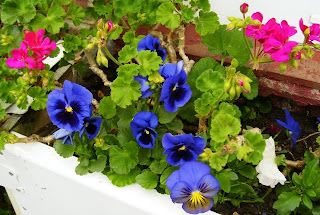 Posted by Margaret at 17:58 No comments:

Today I received a handmade card made by Milan from Monika, Oktay, Milan and Radovan. It was very sweet and funny. More emailing, and getting useful advice from Chris and Carol, and more phone calls.
I am feeling uncreative at the moment which always makes me feel bored, I hope it will pass soon. It does give me a lot of pleasure looking at plants in the garden. Mas has bought some flowers that need to be put into the window boxes and hanging baskets, I will try to get it done tomorrow. 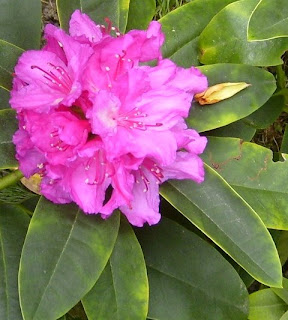 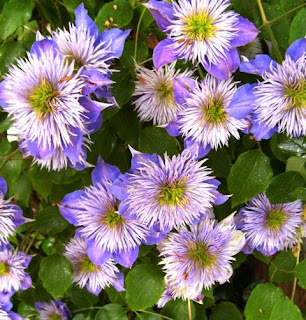 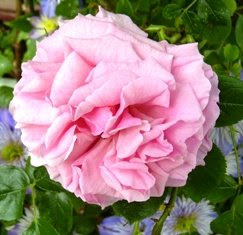 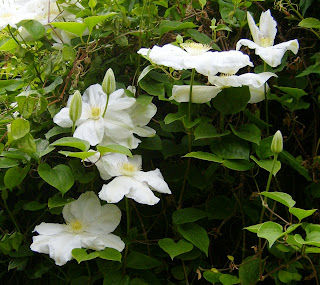 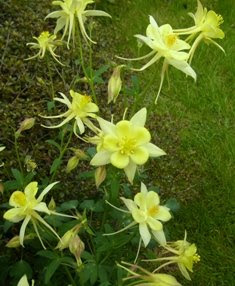 Posted by Margaret at 19:05 No comments:

Communications and shopping till you drop.

Since my last entry Pete returned home, and I have had two more hospital visits, and have had long conversations with Toby and Pete. I have caught up on most of my emails, and had lots of visits from friends and neighbours; the house rapidly filled with carnations and good wishes cards.

On Wednesday I went on the bus with Margaret to Watford's Harlequin shopping center with the idea of buying some new underwear. This bus ride is very scenic, passing through an area of very large expensive historic homes, woodland, Bushey and Old Bushey before arriving at Watford. I prefer taking the bus to driving along the motor way. Unfortunately I did not remember what a rough ride it was, the road surfaces are so uneven it feels like riding a horse and I felt exhausted by the jolting by the time we arrived. We had a fruit drink and Margaret had hot chocolate and I recovered somewhat and managed to get my new underwear, then we returned home, this time not sitting upstairs so it was not so jolting. I did think I had rather overdone it, so rested for a while.
Posted by Margaret at 18:35 No comments:

I am out of hospital now, and on the road to complete recovery, I hope, and feeling very happy to be alive and at home.

I believe the Chinese have a curse which says "may you live in interesting times." My time in hospital was very 'interesting' in several ways, but the strangest was my reaction to a pain drug that I was given. The effects of the drug built up and up until it became obvious that I had an allergy to it.

When I was a child I liked the stories of Sax Rhomer, one of them was called The Breath of Allah which was about the making of a very special perfume, and to protect the secret recipe drugs were burnt so that anyone spying could not read what was written in the book. My hallucinations began in a similar way:
If I tried to read anything the words moved around the page rather like insects, but at least they did not leave the paper and fly around. I thought that this effect was because of relaxed eye muscles. I noticed that the curtains around the bed were flowing upwards, like a river. If I looked into my cup of water it boiled and frothed as if an alka seltzer had been dropped into it, but tasted normal. My sense of perspective altered and I could not tell if things were as close as my nose or across the ward.

Then I began to have hallucinations which were peopled, and thought that crowds of hospital employees were sleeping between the beds on the floor at night because they could not afford to pay rent.

Things went from bad to worse and I woke in the night believing that we had all undergone rendition, and were not in a real hospital but being tortured, and we would all be dead before the morning. I pulled out all my drips, catheters,oxygen and tubes and began shouting to the other patients to escape. A very kind nurse tried to reassure me, so I thought she was doomed as well. None of the other patients had taken any notice, and as I could not move from my bed, so thought there was nothing more I could do.

The next morning I was put on morphine and things quickly returned to 'normal'. Mas visited me in hospital every day, and Pete came often as well, but I was so happy when I was discharged and could go home again. I noticed on the drive home how it seemed to have become summer while I was in hospital. The gardens were full of laburnum in flower and hanging bunches of wisteria, the air was full of light and it seemed as if I had entered heaven. Then home and peace and quiet!
Posted by Margaret at 19:19 No comments: