We did our usual chores, and I did some gardening and filing which I hate to do. Later Mas had to go to the post office and suggested we go out for a coffee as a change of scene. After trying to start the car unsuccessfully a few times Ben appeared and looked at the car as well. He dropped us off at the post office and we did have a coffee out.

In the evening Mas made some nice vegetable soup, which we had with a glass of wine. Salty decided to honour us with his presence and for a change wanted to sit on my lap, so Mas took these photos to mark this unusual event. 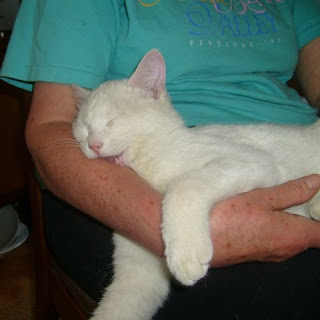