Socialising with friends, struggling with computers

On Sunday Mas thought it would be nice to go to the Man in the Moon and have one of their roast dinners, and he also invited Poppy and Ben. We had a long lunch with them, with lots of joking and silliness which was really fun.

Later in the evening we watched another of the new Sherlock Holmes episodes which was entertaining.


On Monday I tried to catch up with all my 'to do' things, but both of our computers began acting oddly, and Mas spent a lot of time trying to sort out his. We were expecting some difficulties as Mas had upgraded the service with AOL. To get away from all this I went off for a walk, and on my way back picked up some shopping.

On Tuesday our computers were still on the blink, so having no patience at all with computers I left Mas struggling with the problem most of the day.

I had noticed a strange thing in the garden. We have a Pieris forest flame tree in the garden which the wasps have been clustering round. They have made small holes in the trunk, and are sucking the sap from the tree. I have never seen them do this before, and think it may be because we are having such a hot dry summer, but the tree is losing its leaves fast. 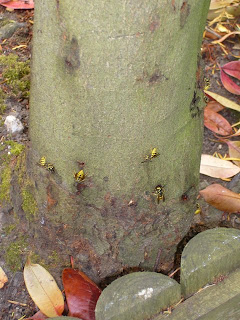 To try to stop them, I smeared vaseline thickly over all the small holes, but it had no effect, apart from making them clean their faces a lot. I asked Joan's advice, and she suggested putting bleach all over the bark. This sounded a good idea, so I did, while listening to a Jay calling raucously nearby.

I went round to Margaret and John's and had chats and tea with them for a while, which made a really nice break. Later I looked in the garden at the tree again, and saw that the wasps were sucking away at their bleach and sap coctails, nonchelantly.
Posted by Margaret at 17:53

Make your shopping memorable by getting best quality products at lowest price. Just log on to http://www.retailobiz.com to buy it now.