Good film and a good book.

Maheena and I could not go for our meditation today, so instead, Mas and I went to Edgware and did practical things. I walked home later for the exercise. I saw two Red Admiral butterflies in the garden today. 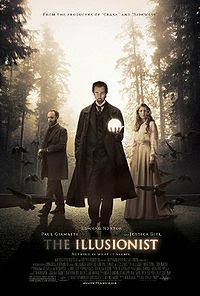 In the evening we watched this film about Elsenheim the Illusionist in early 20th century Vienna. For once a really interesting film.

Today, while we were having our morning coffee, I was just thinking about Pete's book, and looking forward to reading it, when the postman delivered it to us and it was signed by both Pete and Richard, each on their part of the book. I spent some time reading both parts of the book which are both very good. Later I called Pete to thank him and talk about it.

I had an email from Diane who says that Paris is still very hot, and she told me that P.G. Wodehouse's Summer Lightening was on the BBC, so that I could listen to it.

On Wednesday I listened to Summer Lightening, which of course was funny, then Mas and I had lunch at The Man in the Moon and got shopping. Reading Pete's blog I saw he had fallen downstairs and hurt his leg so I called him; luckily he was mostly bruised and shaken, but nothing broken.

I took some videos round to John and Margaret's, then Margaret sat in her garden drinking tea. They have a lovely interesting garden, and although it is fairly small it is crammed full of flowers, fruit and vegetables with not an inch of wasted space.

Later I finished off my mending; I hate sewing! We watched a Midsomer Murder later on.
Posted by Margaret at 15:36