The weather is still very hot, but Mas and I spent most of the day gardening. Mas topped our Yew tree last year, and it got stuck inside the tree, so he spent some time sawing off branches which I then cut up to be recycled. Very hot and dusty work. 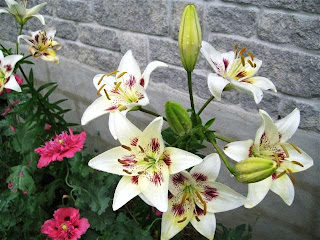 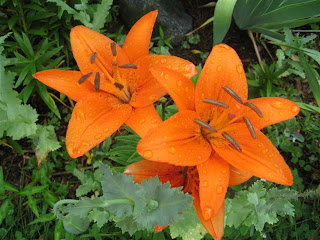 Joan sent these photos of lovely lilys that are growing in her garden (and her award winning idea for a picture involving the use of Lily Beetles, but we won't go into that here, in case sensitive people may hear about it).
On Saturday we had lunch with Tania and Robert in Sazios and caught up on all the news. Later Mas and I did more gardening.
Today Mas finished cutting out the dead part of the Yew tree. This sounds easy, but it involved him standing on a ladder while cutting off large branches. It was very hot and dusty work, with dead needle shaped leaves falling on him with various assorted insects and arachnoids; I was holding the ladder and passing cutting tools to him. When it was done he climbed down the ladder pleased that he had overcome both fears while doing this: spiders and heights!
I am always teasing him (as an ex-marine). When I first met him he was only able to walk in straight lines and turn smartly at a right angle when we reached a corner. I had to hold his arm when walking to teach him how to walk in curves. To this day, he groups and lines up his morning vitamins and pills in military formations, and should I disturb them he looks at me in a resigned way; luckily he is unable to speak before his first cup of coffee in the mornings. When spiders come into the house he calls me, so that I can put them outside, and I jokingly ask if all marines are like this.
Having teased him over the years has been a lot of fun, but really I know that bravery is overcoming your fears and doing the right thing in spite of them, and I know he is a very brave person indeed.
Posted by Margaret at 19:41

Nowadays life has become very hectic and troublesome. People have very limited time to live. Only occasions and festivals bring the opportunity to mix up with family, friends and our loved ones. Fresh Fruit Basket with spring Flowers are inevitably adds a sprint of illumination to the atmosphere. Just go through any Online shopping site and Send Valentine's Day Flowers to France.