Thursday, and Mas went off for a meeting, and I collected some shopping. Pete called and chatted, and we had a series of thunderstorms. I put some peelings into out green recycling bin, and noticed something strange holding onto the inside of the lid. Eventually I worked out that something was trying to pull itself out of its own transparent skin, so I rescued it and put it onto a leaf in the passageway.

I got myself a stool to sit on, and watched the whole process. It took a long time, but it pulled itself free, and while I watched it turned bright green and expanded, muscles forming on its hind legs, and the transparent wings were stretched and dried, and turned green as well. 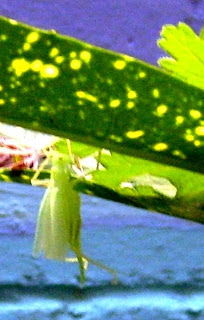 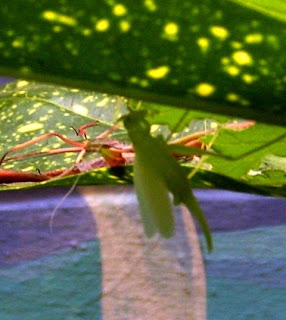 Later I identified it as a great green bush cricket, and I felt priveledged to have seen the whole process.
Posted by Margaret at 16:53