The great pumpkin race and My Name is Red

Monday was a rather dreary day, but Joan sent some interesting pictures from Nova Scotia where they do a Great Pumpkin Race across half a mile of lake. The pumpkins are huge, and hollowed out to make boats which are then painted; it looks like a lot of fun to me. 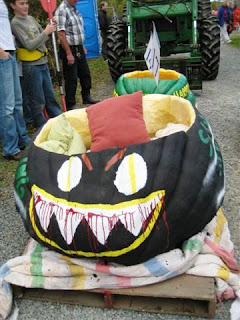 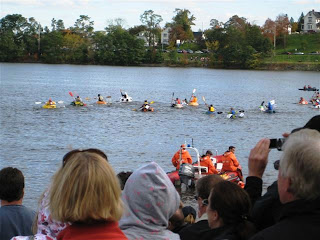 Later we watched a silly film called Big Mamma for a change.

On Tuesday I went back to the hospital, and after long muddles and delays with blood tests I saw the specialist who said that I could have my medication today. I had bought the book 'My Name is Red' to read while I was on the drip, but it was very busy in the department and I could not get the use of a table and as it was awkward holding the book up so I did not get very far with it. Luckily I was next to a very nice lady, and we spent some time talking, the nurses on that ward are very friendly too.

I left the hospital rather late, but felt well enough to come home on my own. In the evening we watched some of Pete's Frasiers.
Posted by Margaret at 19:02