Banana bread with Taggart, after breakfast with Margaret.

Yesterday Mas was late getting home, so I took the opportunity to recycle some bananas and made banana bread. All went well until I was washing the blender. I poured hot water into it and it burst into about eight pieces which is odd as I am always blending boiling hot soup in it. Maybe after so much soup blending it had glass fatigue! The house smelled nice from the cooking though.
Mas came home exhausted after his meeting and trailing through all the tube labyrinths of St. Pacras and King's Cross. We had dinner and watched a violent Taggart episode (just the kind of TV show to give you pleasant dreams!) before going to bed rather early for us.

Margaret called round after breakfast today and we had a coffee and cake and talked for a while. We live in the same street, but had not seen each other for a month or so. After this Mas and I did a few chores locally.

Camellias in our garden. 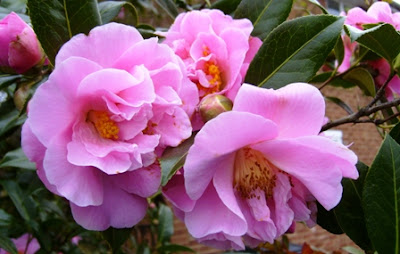