A meal at Veer Dhara withTanya and Robert

Yesterday we met Tanya and Robert in St. Albans and decided to try a new restaurant which is called Veer Dhara, and specialises in cuisine which uses recipes originating from the aristocratic families in India. The restaurant was beautifully appointed, and the cooking was wonderful; we had a really nice meal together!
In the evening we watched a Wallander, and went to bed fairly early.


Today there was more volcanic ash in the air and some airports are closed. The weather was odd with thunder, cloud and occasional sun. Pete called today and chatted,and Toby too. While I was talking to Toby this rainbow appeared. 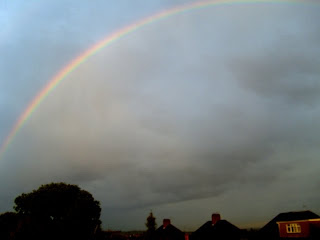 We watched another 'Lewis' in the evening.
Posted by Margaret at 17:40