After the concert another nice day

We had breakfast with Pete, while playing with Calliope. Afterwards Mas and I had a short wander around town, then went back to the Sussex Yeoman with Pete where we met up with Maureen, Pat, Beth and her boyfriend and all had a cheerful lunch together with much talking. I found I had a lot in common with Lorraine's parents. They lived close to Folkestone, and that is where my grandparents lived too. We had all spent holidays in Folkestone, and used the same beach, and knew the same places.

Afterwards Mas and I collected our things, bid farewell to Pete and headed off to the station, hoping that the last night of the concert would go well. 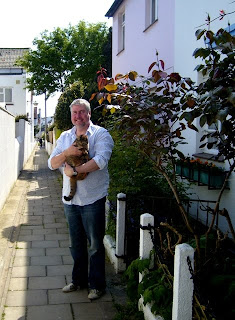 Pete and the 'Terror of the Twitten'

We had a rather fast journey home, despite having to change trains twice.
Once at Mill Hill, we took a cab home, where we found a mouse on the mat, and Salty waiting for us. We both felt really tired, but before long Manu called round clearly wanting to make an evening of it. Regretfully I had to explain that we were too tired to play tonight, and we went off to bed early, for us.
Posted by Margaret at 15:38