We all got up early as we thought that Pete and Lorraine had to get away early. This meant that we all looked tired at breakfast, but we managed to get in a fair bit of chat before they headed off into the wide blue yonder.
We planned things to eat in the evening as we were expecting Tania and Robert, and Poppy and Ben to come round. I cleared up and Mas went off to get a couple of things we needed. Consequently he came home with all kinds of odd things to eat, and his menu got a bit muddled.
Poppy brought round this tasty flan! 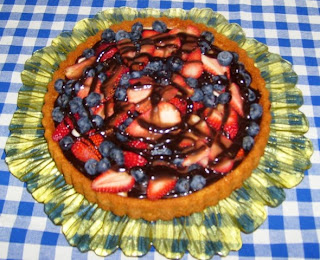 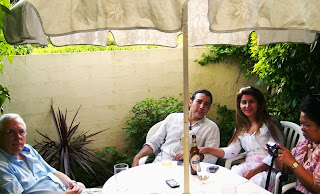 We had a nice time sitting in the garden, but kept the food indoors to simplify things.
We had fun, but both Mas and I felt a bit tired.
On Monday it was very hot and we resumed our usual routine, but I spoke to Ben and Poppy and Toby phoned.
Joan sent this lovely picture of robins eggs taken on her sisters farm; they are protected from raccoons by a small electric fence surrounding them! 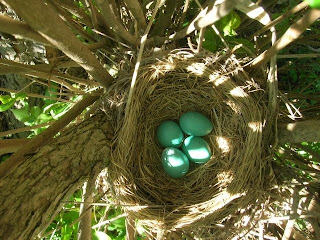 We watched an episode of Midsomer Murders with John Nettles in the evening.
Posted by Margaret at 18:51