Lunch with Tania and Robert and the kindnes of strangers

We got up early, and Toby left to go to Cardiff to see friends. Mas and I had a nice drive to St. Albans and met Tania and Robert at our usual Thai restaurant. We had a lot to talk about, and had a really nice time. Afterwards we got some fresh fruit and vegetables and scampered off home again.

Pete called, and we watched 'The Bill', and I think 'Ghost Whisperer' by which time I felt fairly comatose and had to drag myself off to bed while I could still move.

On Thursday I did various things like getting a new road tax sticker for the car which cost £102 for our small car, and by mistake got on the wrong bus to go home, and went the scenic way to Edgware which took so long that I thought Mas would be beginning to worry about where I was. Walking back, I pounced on a a young gardener and asked if I could make a call on his mobile phone which I would pay him for; typically I had left mine at home. He was happy to oblige and would not take payment, and I left him grinning to himself after he told me he had done his good deed for the day. It is so reassuring to find goodness sometimes when all we hear on the news is disaster.

Toby arrived back from Cardiff, and we had a quiet evening. 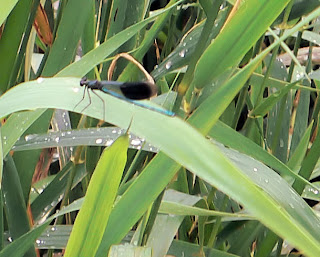 This is one of the flies we saw at Wheathampstead, they were Banded Demoiselles, this one Pete photographed, all I could see where the black dots flying around!
Posted by Margaret at 16:08