Mas had to go off to the dentist again today, and came back with a very sensitive tooth. While he was away I cleared up and vacuumed as we were expecting Pete to come and stay overnight with us. we had also invited Poppy and Ben to come over for the evening and have a meal. Jana also flew back to the Czech Republic today. 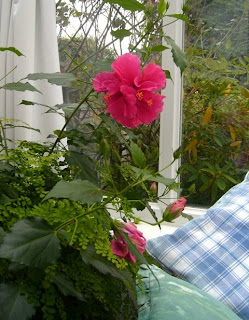 Poppy and Ben arrived first and we sat in the conservatory chatting and having some drinks and nibbles; Poppy had made a lovely starter with aubergine and other ingredients. Ben was joking about some rather explicit books he had been trying to sell at the car boot which made us laugh a lot. Pete arrived looking very formal in a dark suit, and a bit tired. We went into the dining room when Mas called, and he had put out the meal which was chicken based and very nice followed by a blackberry crumble and a lemon meringue which Poppy had bought over, and we proceeded to overcook at the wrong oven temperature! Despite that we all had a cheery time together.

It was a nice evening, but we did not stay up too late as we were all rather tired.
Posted by Margaret at 19:25