The cult of the Elasticated One

We drove off to St. Albans to meet Tania and Robert for lunch. We met in the market and walked off to the Bua Thai for lunch. We had a nice meal and a lot to talk about. Tania had to work this afternoon, and we had not done our shopping yet.


When we left the restaurant, Tania in a hurry, and searching quickly for words, said, before she left she had to go "to the elasticated one." This of course played into Robert's hands, and he said it sounded like a new religion. Repairing to the market sewing stall Robert began to make obeisances to the stall holder, worshipping her. This really shocked Tania who told him to stop it, then Robert told her to come away as it was probably a cult. After this silliness we went to do our shopping, and Tania left for work shaking her head as she went. 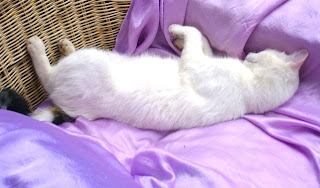 Salty was still sleeping where we left him this morning.
Posted by Margaret at 12:04