We got up and had a cheerful breakfast together, and Pete and I played a game of Carcassonne which was fun, and Pete won. We were not quite sure what to do with 'the farmers', but somehow it was a relief to find that they are placed lying down in fields. We will improve with practice.
Mas took me to the dentist again; he gave me more antibiotics and advised I see a specialist which he would arrange. I am so impressed with the care that they are showing me.

Impressive male duck with a brood patch on his chest. 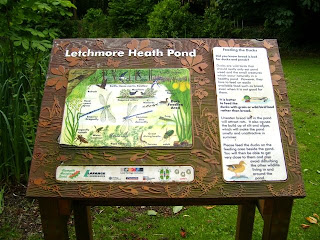 We returned home, after collecting the new medication, to find Pete had vacuumed and tidied up, which was nice. We went to Letchmore Heath to the Three Horseshoes for a pub lunch and had a cheerful meal together. I became fascinated by a strange insect which I took for a beetle as it had no visible wings, but looked like a wasp, I had never seen one of these before. It was going up the inside of the window as we left, and I tried to catch it to release it outside, but it was too high for me to reach without standing on a chair. Pete got it and we took it outside and I tried to photograph it on his hand, but he kept saying it was biting him, so the picture was out of focus, but it was funny. 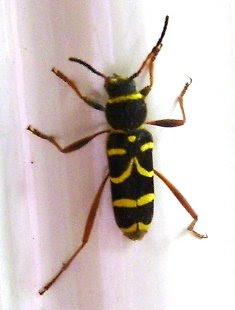