Fish and chips and Stag beetles

Today I woke and felt much better, still a bit tired though. I managed to clear up the house a little, and pulled out a few weeds in the garden while Mas had to go off to a meeting.

Later we decided to have a change of scene, and went off for a fish lunch and collected some shopping. I cannot believe I feel so well today, and did not take the special anti nausea medication.
Diane called as she had been concerned at how strange I had sounded yesterday when we spoke, and was reassured that I am back to 'normal' again. She mentioned that she had found a large stag beetle in her garden which had cheered her up.
I remember when I was a child my father had some stag beetles in an old aquarium as he was doing illustrations of them for a book, and we kept them as pets for a long time. In the end there were so many of them that we decided to release them on Hampstead Heath which we sadly did, emptying them out into a patch of the woods on a dismal afternoon. Each time we passed the spot on walks we looked for them, but never saw them again.
Lucanus Servus 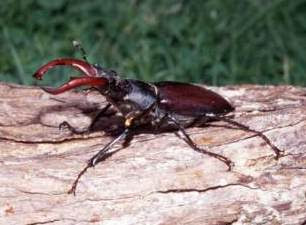