We went off to Borehamwood to research and buy some flea treatment for Salty; he hasn't got them yet, but unless we take precautions it is inevitable. Later I walked to Edgware and bought myself some new trousers. The weather is grey and it has been raining on and off all day, so Salty has been sleeping indoors instead of on the shed roof. 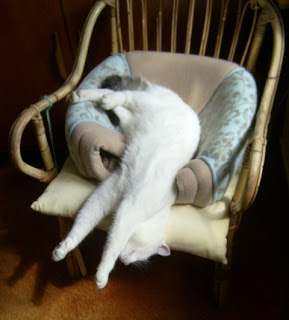 He does have other places to sleep, but likes sprawling on top of his bed, until he falls off it.

In the evening we were watching TV, with the curtains drawn between the sitting room and conservatory, and Salty burst through with an alarming meow as he usually does, but his head was covered in a big smear of blood. When I cleaned it, I found it was not blood, but some kind of water based paint, thank goodness, and he was not hurt.

Today the weather was better, and after Mas and I carried out our strategy of putting the flea drops on the cat while he was asleep. I went into the garden to do more weed clearing and putting grass seed down. Mas spent all day struggling with the computer and AOL. I had to work in the garden to remove myself from the problems, if left to me I would throw the computer away after violently destroying it first.
Posted by Margaret at 11:25