Talking to friends and family(not the monkeys)

On Tuesday Glen called in and had a sherry and biscuits, and told us what a nice time she had during the holidays with her daughter and family who had been visiting her. Afterwards I went for a walk, the longest I had done for a while which pleased me. Mas was making repairs to our fence in preparation for Salty being let out into the garden. I was having a rest later, when Manu phoned, he is looking forward to getting together one evening soon.
Today we had lunch in Stanmore, after doing a few chores and shopping, and sinfully watched an afternoon film on TV. Pat phoned, and later so did Toby. He and Romy really enjoyed their holiday in Guatemala, going into the jungle and looking at Mayan ruins. It must be interesting to hear Howler monkeys in the morning rather than birds. 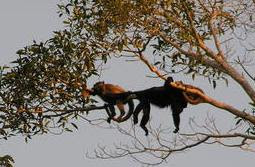