Today as usual, I took Salty into the garden, after a brief but dangerous struggle to put his halter on. He went happily round the garden and he sharpened his claws on several trees, trying desperately to sprint up them all, but being restrained by me. As we were coming back, Mas came into the garden, and before I noticed, Salty had got free from the halter and had rushed to the side gate that leads to the front garden and road, and I rushed after him. Salty turned to face me and hissed, which was a first for him, and surprised me too!

Later Mas was sitting in the kitchen chatting, with Salty on his knees, and they were both watching me while I took the lentil and vegetable soup I had made, and put it in the blender. Without thinking I turned on the blender which is very loud, and the cat sprang upwards and backwards and was plastered on Mason's face which had also caused Mas to do one of his startled jumps for which he is rightly famous. The cat shot away, and it was along time before Mas and I could stop laughing, and go to find him.

In the evening we began watching Battlestar Gallactica which Mas had been looking forward to. 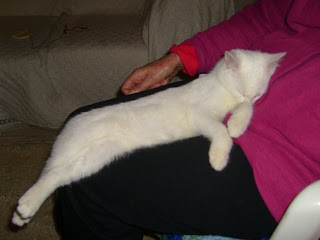