The computers were misbehaving all day and it seems that AOl were having problems too, so this kept Mas busy and frustrated most of the day. For a break we watched Merlin and later the dreary Wallender again.
On Monday I received a lovely surprise Christmas present from Diane, so I phoned her later, and she seemed in very good spirits which was nice too.
Salty on the other hand, seemed to have disapproved of the economy litter we had bought for him to use, and had dug up a planter in the conservatory and used that, but he had obviously enjoyed using earth and had thrown it all over the floor and window sills with great enthusiasm. I put it all together again, covering the earth with black plastic and orange peel, and put the more expensive litter back in his tray!
Joan sent some pictures, one with this unusual horse, a Gaited Leopard Appaloosa who is 26 years old. 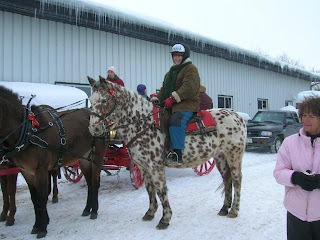 This is a Bernese Mountain Dog. Every year in a village not too far away from where they live there is an All Animal Christmas Parade, but it is possible to see the owners and talk to them. 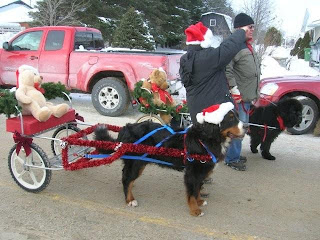