Thai lunch and walking with Pete

I spent a few days seeing a few friends and neighbours, but felt that I could not settle down and concentrate as I seem to be in waiting mode all the time.

On Tuesday for want of anything better to do I took a bus ride through Mill Hill and off to North Finchley and back again. Later I caught up with my emails and watched something on TV with Mas. 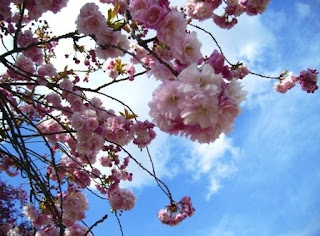 On wednesday we went as usual to St. Albans; the countryside is coming back to life and looking very fresh. We met Tania and Robert for lunch at the Thai restaurant, and caught up with all the news, our friendly restaurant owner gave us a huge dish of complimentary banana fritters on scoops of icecream. We were so full afterwards that we did not feel like buying much fruit and vegetables from the market.

Thursday morning I was lucky enough to be able to see a doctor as I had got an eye infection, and got some antibiotic drops. Before too long Pete arrived and we had lunch together before leaving Mas to do his tax returns.

We went off for a walk from Elstree across fields, round the golf course and eventually came out in Butterfly Lane. There was a cold wind, but the air was scented as lots of the trees were in blossom. We saw a stately Heron standing beside a small pool, but before I could photograph him he flew off into another field. We did not walk for too long as Pete had to go off to London for dinner. 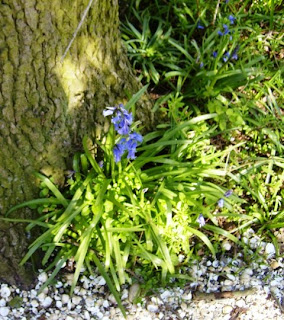 There are new paths on the golf couse which are made of sea shells instead of gravel. Bluebells are begining to flower too.
Posted by Margaret at 18:39