Biding my time with butterflies

On Saturday I received a parcel of prints from my printers which I did not have time to look at until later. We went off shopping, had a quick lunch.

On returning to the house I found I had received a piece of mail from the hospital which contained two letters; one said I had been placed on a waiting list, and I could be waiting for 20 weeks, and the other letter said I was to be admitted to hospital on the 29th, but would have to check on the day to see if there was an available bed. Feeling somewhat dispirited we spent the rest of the day moping about doing things to pass the time as well as possible till I could check with the hospital on Monday.

On Sunday I looked at the prints of my pictures as there were several that I needed to hand finish, adding gold and silver where appropriate. I also caught up with correspondence and household chores. Toby phoned and we had a long chat about things which was cheering.

On Monday the weather seemed very sunny. I confirmed with the hospital that I had received their letter offering an appointment for the 29th; I did not mention the other letter as I thought it would confuse them further. I spent more time finishing the prints. Mas finished making a support for the roses and clematis in the garden. 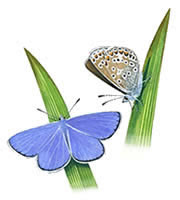 
Later I went into the garden and saw one of our small trees which is in flower covered with a myriad of flies of various kinds feeding on the nectar. One type of fly I had not seen before; it looked rather like a wasp, but had a black shiny body. I also saw a Common Blue butterfly; the first this year.

On Tuesday we went shopping in the morning and had a quick pub lunch. Diane came over in the evening for dinner as planned, bringing a bottle of very nice French wine which complemented the chicken Mas had roasted, perfectly. Diane had a new hairstyle and was looking glamorous and healthy, but all of us were feeling rather tired and we made an early night of it.
Posted by Margaret at 19:00