I woke up from a nightmare, which is unusual for me. Once we were downstairs we had a suspicion that the rogue tabby cat has been in the house again as Salty's food was neatly eaten, and the plates licked clean. I spent some time on necessary housework, then took out some of my paintings. I decided to put two of them on the website, so photographed them.
In the afternoon we watched Diagnosis Murder and in the evening a tape of Heaven's Gate; it is visually beautiful, but I had not remembered that it had such an enigmatic and negative ending. 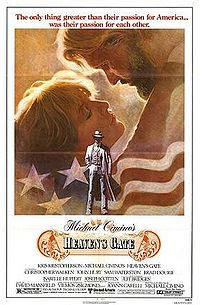 Today , after breakfast I began painting a view using very restrained colours which is quite a challenge for me. Having had enough of being restrained I thought I would have lunch, as I went downstairs I noticed I had paint under my fingernails, so scrubbed my hands, and glancing in the mirror found I had dark paint on my teeth, which gave me a jaunty medieval air.
Later as a respite from subtlety I put my bright pictures up on my website. 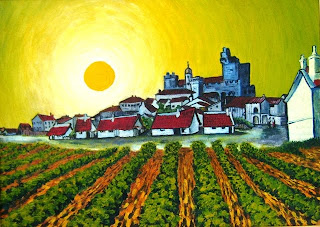 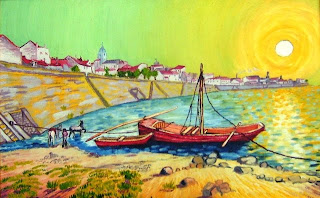 In the evening we watched Les Visiteurs, with Jean Reno and Christian Clavier. Despite having seen this quite a few times it always makes me laugh, and that is a good way to end the day 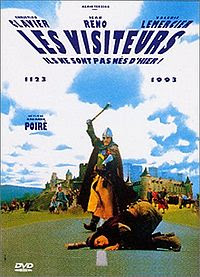