Here are three types of fungi that are in our garden, a sure sign that autumn is here now. 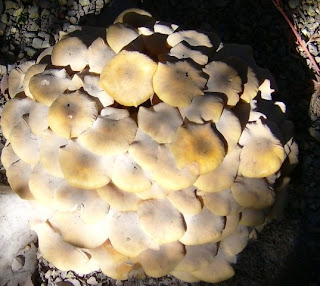 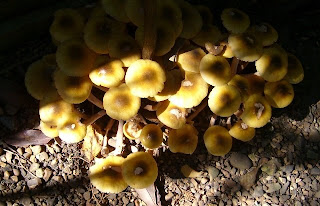 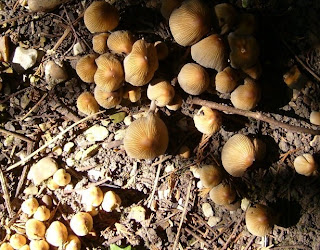 It was a nice sunny day, and we did a little gardening and I went for a walk and got a brace for Mas to wear on his hand to stop him bending it in while he is asleep, and so straining his elbow. then we spent the rest of the day doing our usual things until we watched CSI in the evening.

On Sunday, after breakfast, we walked off to a car boot sale being held in Arches field, it was a huge affair and seemed to stretch over three fields. People were buying bagfuls of things, and looking pleased with themselves as they carried them home. I got two jazz CDs, one with Miles Davis and the other with John Coltraine, hoping they would be alright.

After lunch Pete phoned saying that he had collected a kitten with Lorraine and it was now settled in his home and asleep, and he gave me a full description of the kitten before putting the phone down. He called back in about two minutes for me to hear it meow and purr over the phone, which I could!

We watched a new series on TV called Merlin, and an Agatha Christy's Poirot with David Suchet before bedtime.