My computer is still dead, and Mas spent most of the day trying to sort it out and making various two hour long conversations with different IT people. I did gardening as I could not stand listening to it all; if left to my own devices I would have thrown my computer out and gone back to writing with ink and quill.
In the evening we were so fed up we watched an old episode of Jeeves and Wooster to relax, but I still had a poor nights sleep.
Friday was a ditto of Thursday, except that we went swimming in the afternoon, and in the evening watched a Pie in the Sky and the Mentalist, which seems increasingly stupid to me.
At a later date I found Joan had sent me this picture of spring flowers in her garden 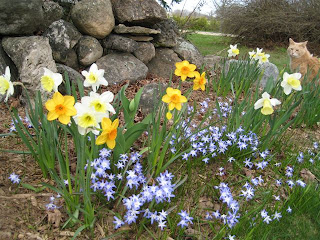