Yesterday the weather was nice enough for us to go into the garden and have tea on our swing for the first time this year. While we were doing this Salty unexpectedly jumped onto the canopy which made Mas jump violently and throw most of the tea over the garden which made me laugh a lot. Mas could startle for the Olympics!


Later I planted out the geraniums into our window boxes, watering them in afterwards.


This morning we found a small dead mouse in the hall which we disposed of before breakfast.


Later we travelled down to Leicester Square, and then walked to the National Portrait Gallery. We were going to have lunch at the restaurant there; this was a present from Romy and Toby which we had been looking forward to. We had several drinks and a three course meal with another bottle of wine while looking out of the window at this London view. 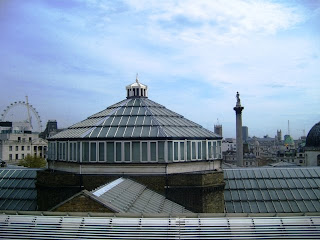 The restaurant was full, but we took our time and really enjoyed the meal. We were so full that on the way home we both fell asleep on the tube. It is a good thing that our stop is at the end of the line!
Posted by Margaret at 19:38