The Stafforshire Hoard, but not the Year of the Mouse

Today I went off to the British Museum and met Pat as arranged on the steps outside with the odd snowflake falling.

Pat wanted to see the exhibition about the Staffordshire Hoard. This is one of the most significant archaeological finds for the UK. At the end of last year a Metal Detectorist unearthed part of a hoard of treasure, and he and the farmer who owned the field reported their find. It is believed that some of the artifacts date back to AD 700. There are in the region of 1,500 pieces valued around 3.28 million pounds. http://www.staffordshirehoard.org.uk/ 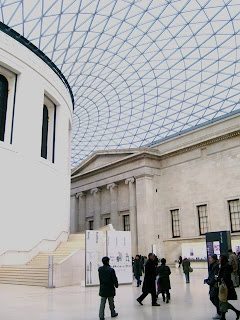 Inside the British Museum

We wandered around the museum until we found the Staffordshire Hoard display : two small cases displaying a few broken sword handles, coins and broken bits and pieces. Pat was very disappointed at how little there was to see, and she said if she had found any of it she would not have bothered to pick it up. The bulk of the hoard is being cleaned and valued.
After this disappointment we decided to go off and have lunch, so we went to Leicester Square, 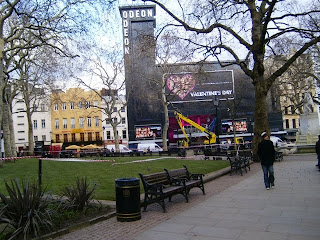 and found The Stockpot for an economical lunch. The Stockpot was filled with people; it was mostly the pre matinee crowd. We had a filling lunch, and when we left decided to walk to Covent Garden and see what was going on there. 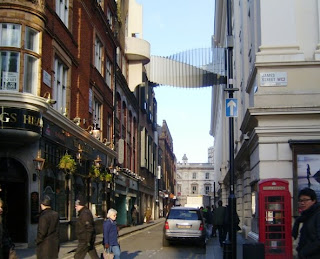 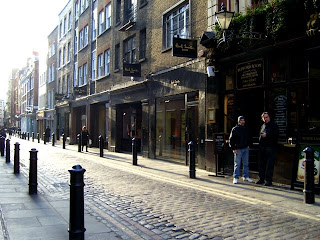 We passed this interesting bridge which I had never seen before.

Once in Covent Garden we heard this lady singing opera to a small audience as it was so cold. 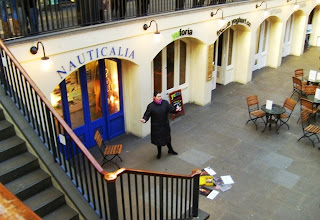 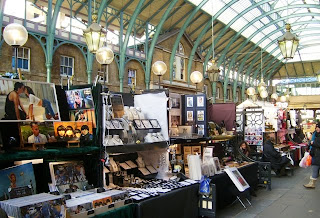 There were all the usual stalls set out, but not many people around looking at them. When we left, we walked to China Town to look at the decorations. 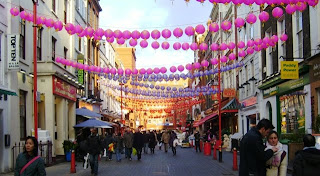 I saw these interesting cakes in a baker's window, and a tall man asked if I wanted a picture of me looking at the cakes longingly. When I showed him the cakes, he told me it would be the year of The Mouse soon, but the cakes didn't look like mice to me. 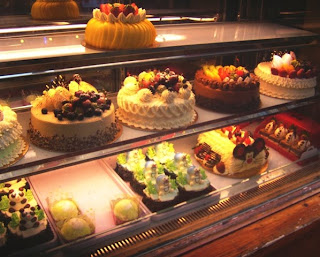 Later, walking back, the same man hurried over to me and said he was sorry, but the next Chinese year would be the year of the Tiger, he said he never made mistakes, but when he did he wanted to put them right.
Pat and I walked back to the tube, and took the Northern Line home, to the opposite ends of the same line.
In the evening Mas and I watched a new episode of Midsomer Murders with John Nettles which was fun.