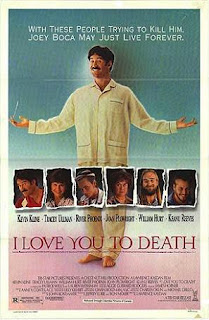 We were expecting Pete to come to stay, so Mas got in some shopping, and I made up the bed and generally tidied up the house in readiness. Mas lost his voice, and when Pete arrived he briefly joked that we had found Mason's mute button, and when his voice started coming back and he was whispering Pete said he sounded like a Mafioso.
We exchanged presents, then we had a sloe gin (courtesy of Pete, but next year I resolve to make some too,) before having a tasty meal of roast ribs and all the fixings. We later watched 'I love you to death' with Kevin Kline which Pete had not seen before, and is based on a true story, but is funny. After this Pete and Mas began to watch 'Batman Begins' while I cleared up.
It had been a nice day, apart from Mas having a sore throat.

Today we got up earlyish and had a relaxed breakfast together, listening to the music CD Lorraine had given me, which is very peaceful. Wynford called around bringing me a present that Glen had put aside for my birthday today. He told us the details of his mother's passing, and was extremely upset and sad.
Pete and Mas finished 'Batman Begins', and we had a nice turkey dinner together before Pete headed off home, taking the subdued painting I had done for Lorraine with him. 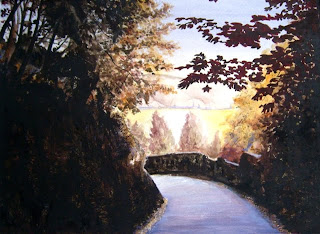 Not long afterwards Maheena called in bringing me a birthday present, and I had the chance to give her Varun's preset as it is his birthday today as well. We stayed talking for quite a while, Maheena very sad about Glen's passing too. When she left, Florence called and chatted too, and Diane as well. By this time I was feeling very tired, and Mas was feeling much worse.