Today was another sunny hot day. We went off to St. Albans, and were surprised at how clear the roads were for a Saturday. Mas started shopping, and I went off to see if I could find The Rock Guy who sells all manner of beautiful stones which I always like looking at. He only works in the market on a Saturday. When I a saw him he asked me how I was, and I told him. He gave me a small piece of Petalite which he said was a good preventative for many illnesses, told me how to meditate with the stone and how to cleanse it afterwards. He would not take any payment which is typical of him.

We hurried to the Bua Thai restaurant and met Tania and Robert for lunch there, and caught up with all their news. We got a little more fruit afterwards, and I drove home while Mas snoozed. When we got home we saw Poppy's car and Ben's van parked opposite our house, so knew they had come back from Guernsey where they have been living for some time. The people who had been renting their house called by to say goodbye, and said they had found another flat to live in. 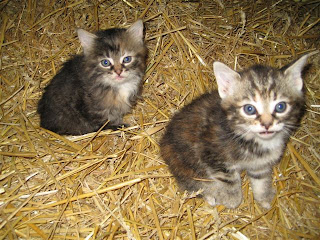 Kittens picture sent by Joan
Posted by Margaret at 14:45