On Friday I was feeling very tired, but we went to Stanmore, and while waiting for Mas I met Susie in the bank, looking very smart dressed in black and white. Mas and I had lunch at The Man in the Moon which was nice and then and got a little shopping.

Saturday was similarly uneventful. Monika phoned trying to arrange that we do a six mile walk around St. Albans next Wednesday. Both her boys have had Chicken Pox recently, luckily Olga is staying and can help. I walked to the library and returned my CD and books, but unluckily I had forgotten my library ticket so could not get any new ones out.

On Sunday morning we got a phone call saying that they had found our cat's collar in their garden, as they were only five houses away the little girl brought it back for us, and she came in to see who it belonged to, and met a sleepy Salty.

Later we drove off to Christiane and Eddie's home as we had been invited to tea as it will soon be Christiane's birthday. We had a really nice time chatting to everyone, and met more of their family and friends which we enjoyed as well. They had prepared a lovely buffet, and Christian had also made some sushi which was really tasty.

The view from their front door shows the lit up arch of Wembley Stadium. 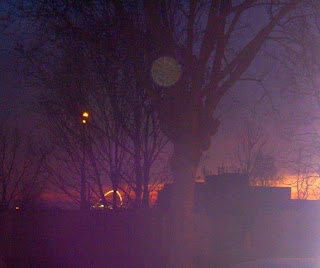