Mas and I had breakfast and did our usual things until it was time to leave. Mas drove me to Mill Hill Broadway station, then I bought my ticket to Gatwick and got on the train which soon arrived. There were many delays and hold ups, but I eventually arrived at Gatwick and Pete was there soon afterwards, and we checked in. We had a G & T, and full of bonhomie found we had to run up long corridors to our gate number.
We had a pleasant trip over, and leaving the plane found that the weather was mild and sunny and the air smelled familiar and clean. We got a taxi to the Barbarie hotel where the red Camelia bushes were in full flower. We were shown to our rooms, mine being next to the bar, and very nice. 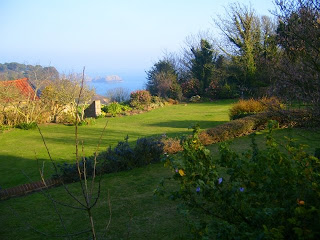 Before long Pete and I went off for a walk down all our familiar lanes, listening to the rather evocative sound of the foghorn as it was also rather misty. I remembered that when Toby was born in June so long ago the fog horns were sounding for at least a week day and night. On the way to Icârt we noticed lots of rabbits, all of them looked very healthy and large. The cliffs were bright with gold gorse, white blackthorne flowers on bushes, celandine and primroses and we also saw a peacock butterfly.
We had a drink in the bar before dinner where this familiar sign is displayed. 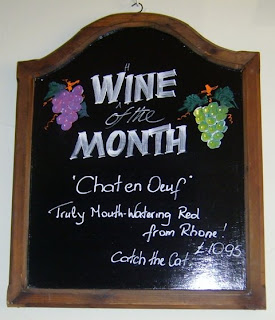 We had a wonderful diner in the restaurant at La Barbarie; towards the end of the meal the lights failed and candles were placed on all the tables which added to the atmosphere.
Posted by Margaret at 18:40