Busy doing not very much.

On Sunday morning I walked off to the car boot sale, and John and Margaret passed in their car, but stopped to chat for a moment. There was nothing very interesting at the sale so I came home again to find Mas had been working non stop at his desk, so I suggested we go swimming in the afternoon.

When we arrived at the leisure centre we were told that as there was a swimming gala we could not swim today, so we walked in the woods for a little while instead, where we could hear children cheering in the distance, probably doing sports of some kind.

On Monday morning I went off with Maheena to have another meditation session which was a peaceful break in the day. Later I wrote to my credit card people as we keep having deductions from our account taken by a company in California, these have been refunded once, but they are trying it on again.
Ben called in later bringing back some garden tools, and in the evening we watched an episode of Lewis.

We managed to go swimming on Tuesday which was good, and I spent most of the day gardening. Mas thought he would scoop out the leaves, from the fountain in the garden, with a small fishing net. Salty pushed himself between Mason's arms and was trying to catch them as well, he did pull out two leaves.

We went to Stanmore, and had lunch at the Man in the Moon, then got our shopping. Normally we pay £1.00 to park, and if we get back to the car after shopping within an hour and a half we get our money back. If we take too long we forfeit the money. This time we were late back, and expected to lose the £1.00, but I was warned that if we were late again we would have to pay a £90.00 fine. Sadly we will have to change our routine now. 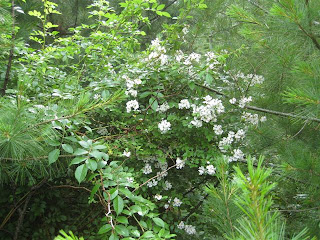 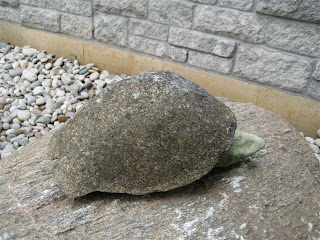 Joan sent these pictures from Canada, she came across the white roses when walking in the forest, and the turtle shaped rock has been added to their garden.
Posted by Margaret at 19:10