The man who lost his trousers, and another fine art.

We seemed to have another busy week, Mas was busy on his computer, and I did a lot of gardening and walking. Pete called, saying that his visit to school had gone well, and they liked my pictures of the Skelly characters.
Mas and I went swimming, and when he went off to town on Thursday I went swimming again. This time, talking to another swimmer, he mentioned that he had all his kit stolen yesterday, including his wallet and car keys. When Mas came home he was really tired; he hates travelling on the tube. We decided on the spur of the moment to go off to the curry club, and have a meal there. Luckily our new friend Ken was there, and we had a nice meal, but an even more interesting conversation, and amongst other things he told us about his recent holiday in India, and we talked about meditation and French films.
The next morning I walked down to the station, and on the way saw the two Jims who are neighbours. Irish Jim, talking of Lilu, (Ben and Poppy's small white dog,) said he would not take that dog out. He said he had seen Lilu (who was on a lead) tear the trousers right off a man she did not like the look of. This made the other Jim and me laugh a lot. On a more serious note, Jim's neighbours, on either side of him, were recently burgled. That makes five burglaries on one side of our road.
I met Christiane at Hendon Station, and we travelled off to Olympia as she had free tickets to the International Fine Art Fair that was on today. 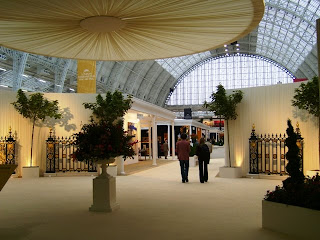 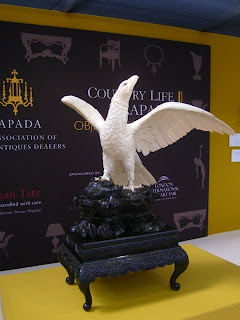 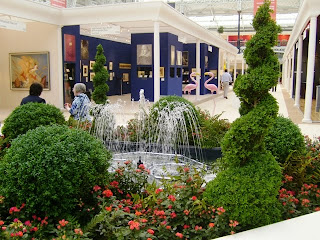 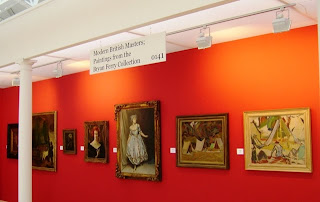 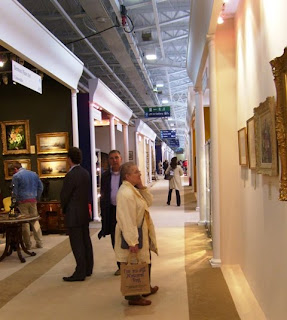 We spent a long time looking at
everything, there were beautiful carvings from Japan in ivory, wonderful hand stitched
sculpture over animal skeletons, and lots of jewellery too.
We stopped for a cup of tea, and we had bought some biscuits with us. Eventually tired, but feeling we had seen everything we left and went home again, another nice day!
Once home again I had a quick tidy up, and before long Manu came round, and we sat in the conservatory and had some cool white wine and chatted. Manu wants me to check with the local church hall to see if we could use one of their rooms, one evening a week, so that our art class people can use it. I will check with them. We had a nice evening, but both Mas and I felt really tired and staggered off to bed as soon as we could muster up the energy to climb up the stairs.
Posted by Margaret at 18:50