Yesterday was our wedding anniversary, the 24th! I spent most of the day gardening and doing a belated spring clean, and Mas went out to see a friend. Pete called and chatted which was nice.

Today Mas was busy, so when Oktay called round I left Mas for the day and went off to Cheshunt with Oktay. Monika had prepared an excellent lunch, and one of her friends had come round with her two little children too.
Afterwards we sped off to see Milan's school sports day; the weather was very hot.

I think we saw everyone in the school race, including a brave boy who seemed to be wearing leg irons, but all the parents gave him applause and lots of clapping, so he looked quite pleased with himself. 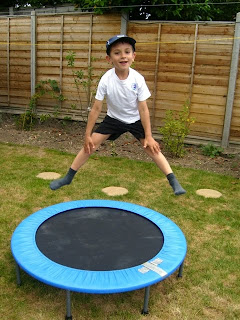 When we got home again Milan was still full of energy and springing about in the garden; Monika showed me her white currant bush and gooseberry bush too, and a beautiful peony, and we had the chance to chat for a while.

Oktay cooked a really nice BBQ, using his new garden barbecue, which we enjoyed. Later Monika and I took the boys off to the local park, to the playground, and at one point Milan and I were climbing a tree together, and Monika remarked that it was a good thing Mason could not see what I was doing.

Milan asked if I could sleep over and read him some stories, but I told him that Mas would be lonely on his own. Eventually it was time to go home, Talu was tired so Monkia was going to put him to bed. Milan came for the ride too, but before long he was fast asleep in the car. It had been a really nice memorable day, but very tiring too!