I put the new 'spot on,' that we had bought from the vet, onto Salty before leaving with Mas who was going off to do some shopping. As I had another exhibition ticket I had arranged to go back to the Affordable Art Fair with Diane, for a day out together before she goes off to Normandy for a while.
After a difficult and slow journey, and because several of the underground lines were closed today,I had to take the bus, and after a roundabout journey I got to Sloan Square. I had told Diane about the Oriel, and so we met in the cafe bar of the Royal Court Theatre and had a glass of wine before going off to the art show. 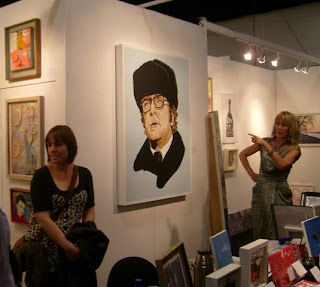 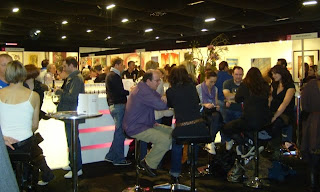 We walked about looking at the art for a few hours, and I had the chance to talk to one of the gallery people about painting watercolour on a gesso primed board or paper, which was useful.

We had some Earl Grey tea and chocolate cake and talked for a while. Diane will be leaving for France at the end of March.

Afterwards we walked to the station and managed to get a train back to Edgware without changing trains.
Posted by Margaret at 17:25