This week I spent a lot of time researching things, and sorting out direct debits. Boring but necessary. I called Margaret and talked to her for a while, and I spoke to Pete as well.

On Wednesday Mas and I went off to the Man in the Moon for lunch, only to find out when we were going to go home that the power steering in the car had gone wrong, and it was difficult to manoeuvre out of the car park. Mas dropped me off and I walked home with the milk we had bought, and he drove down to our local garage which luckily is within walking distance. The garage called later, saying that they may be able to part exchange something, if it was in good enough condition, also that the fan belt had gone as well. The car should be fixed tomorrow.

On a more cheerful note Joan sent a picture of Ethan's lovely cat, Skrimshaw, who is trying to fit in with the other cats and dogs 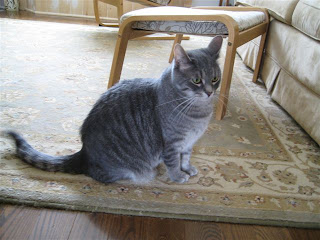 ( his face is like my childhood cat Jimmy Lizard)

Today the garage called, the car was fixed, and for £100 less than we had expected. We cancelled the vet appointment as Salty is completely back on form now, but still taking the pills.

In the evening Robert picked us up, and we went, as planned, to The Man in the Moon as it was the evening for their Curry Club. When we went in all the tables and alcoves were being used, and we wondered if we would eventually get a table. While we were dithering we were invited to join someone sitting at a table as there were three available seats. In no time at all we were all four of us chatting and having an interesting time as well as a tasty meal. His name is Ken (from Kenya). We did not stay too long as Robert had to go home and work.
Posted by Margaret at 16:35