This morning I called in to see Barry to keep him company for a while, but Wynford was home too. We chatted for some time, and then I went home for a hasty lunch with Mas as we had decided to take the day off, and go to see the London Art Fair, which is held at the Business Design Centre. 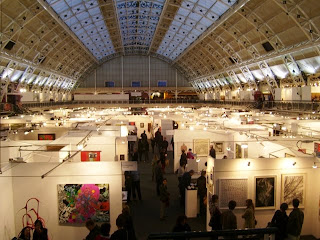 We took the train to Angel, and having collected our complimentary tickets went in to see the exhibition. There was a lot of familiar work there, but these two pictures were my favourite ones. Sadly I cannot remember who painted the yellow one. 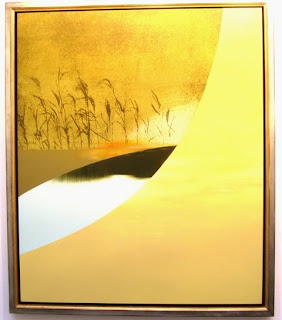 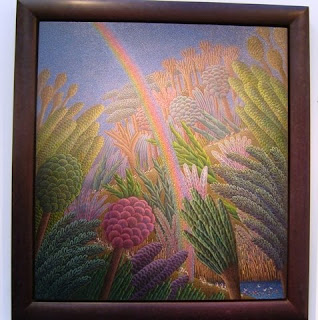 This picture was by Rebecca Hossack, the sale price was £13,000. 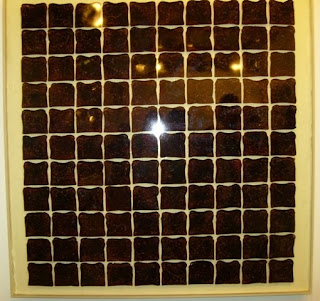 This picture was made with slices of burnt toast set in a resinous material to protect it. 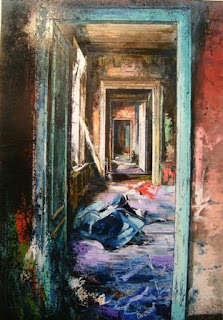 The Sesame Gallery did a solo show for Henrijs Preiss in an installation called The Black Lodge, inspired by Twin Peaks. His work is full of symbolism of variuos kinds. 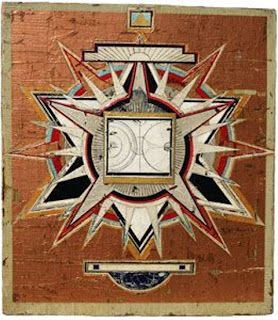 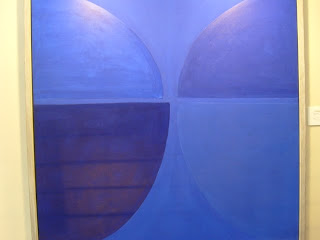 This large blue picture was priced at £75,000, but of course who paints the picture makes all the difference.
After a while I began to feel the vertigo that I have, quite badly, and to get a bad headache. Sadly if I move my eyes too much it brings on the vertigo, and I had probably had my eyes on stalks for several hours.
We got a train easily, and when we arrived in Edgware it was dark and cold, so we thought to save time we would have something to eat at Nando's.
This restaurant is always busy, so we thought the food would be good. Admittedly I was already feeling quite nauseous, but when I looked around at the meals all I could see was piles of burned chicken carcasses hacked up. At this point I almost became a veggietotaler.
Toby called in the evening, and explained to me how to watch TV on iplayer which will be very useful as we are unable to programme our video recorder.
Posted by Margaret at 20:21