On Monday after breakfast, Poppy called, and we walked with Lilu in the park, then down to Edgware as I had to buy something from Rymans. Mas spent a lot of time fitting the cat door today. Poppy also gave us an unusual dessert she had made from rice, cinnamon and lots of saffron; it had an subtle and rather perfumed taste, and it is fun to try different things.

Today the cat would not come through the cat door, and we found it had somehow got jammed open with the tunnel partially blocked. Salty refused to go near it, so we had to remove the whole contraption and just leave him a clear tunnel to run through, and gradually he began to use it again. I think somehow the door had snapped onto him as he was going through before. 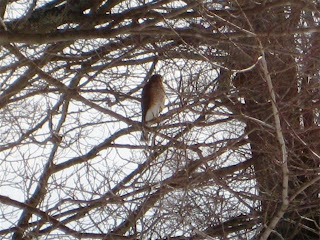 Joan sent this picture of a Sharp-Shinned Hawk, as he arrived in their tree so all the small birds wisely left; they must have known he thought they were breakfast.

I watched a Horizon programme about viruses on iplayer which I found fascinating. If they can be said to be both dead, and alive, when the conditions are right it sounds very much as if they have resurrections, and is it possible that they set up the life and death pattern that humans follow? Later Mas and I watched a Taggart together.
Posted by Margaret at 17:48